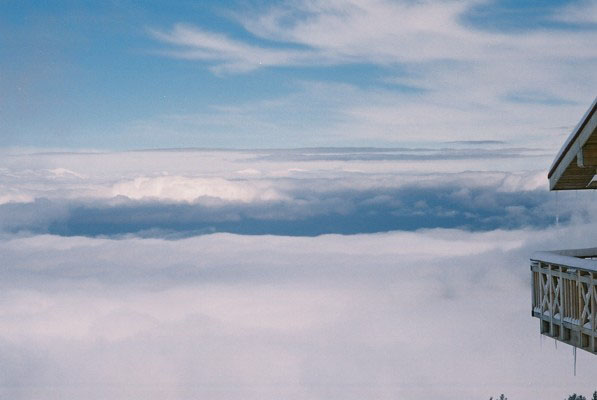 On 11th March 2006, Jack and myself set off to Bulgaria to sample their hospitality and, more importantly, the quality of the snow.

We arrived at about midnight, and as soon as we had checked in we went in search of something to eat. Naturally everything had just closed. So we ended up begging the waiter in the hotel restaurant to cook us anything. He did and came back with some very nice, if slightly cold, food. He also gave us a potted history of Bulgaria.

Once we had had our fill, of history and food it came time to pay. Naturally the tills had been cashed up and we had no cash, the waiter just said, “it’s no problem, you pay me tomorrow.” We finally got round to paying him on Wednesday.

The next day we were down at the ski hire place early and spent all morning queuing to get our gear, we finally got up on the slopes about midday. There was loads of snow, in fact it didn’t stop snowing for the first two days.

I skied all week with my dog on my back, my ski instructor christened him Rosko.

My ski instructor, Alex, was a freestyle skier, and wanted to do jumps all the time. So we spent a lof of time on one particular run that had all the best jumps on it.

One day I decided to take Jack up to the top of the mountain and ski all the way down, only there was a lot of low cloud that day and we got hopelessly lost and skied off piste down the mountain, the snow was sometimes up to our waist’s. It took us about an hour and a half to get back to the gondola to take us down to Bansko and the last half an hour was along a snow covered road.

The picture above was taken from the top of the mountain, when the clouds cleared a little on Wednesday, before that it had been really difficult skiing. We had these amazing kebabs were served flaming at one of the restaurants we visited (so good, we went twice). On Wednesday we did an hours snowboarding, just to try it out, Jack enjoyed it more than me, I spent too much time on my backside. It was quite good fun though.

I also did the slalom course, in what I thought was a good time of 34 seconds, I went back to the top and asked the guy what a good time was and he said 22 seconds. So I’ve got some improvement to do yet.

Jack’s quote of the holiday, “Avoid large Italian women when coming off chair lifts cos they’re a pain, in the arse (and the knees)!”

In the picture underneath is my ski group, (well those that decided to come anyway) quite frequently there were only 3 or 4 people, there were supposed to be 7. So there was me, Alex our ski instructor and Jeremy.