The good thing about being stuck on a bus for 13 hours is that you get to meet people, as I have already mentioned. Someone else I met on that bus was a Polish guy called Robert, he was trekking on his own to the Annapurna Base Camp and we agreed to go together for the first part of the trek.

We had intended to go to Poon Hill first which would have meant that we would trek for 2/3 days together before striking off on our own, as it happened we took a wrong turn at the beginning of the trek and I did my circuit the ‘wrong way round’, it also meant that we parted company half way through the second day instead.

The trek itself was pretty uneventful; trekking around Annapurna is really easy as almost every single farm you pass is also a teashop and if you are not sure of the way to go then there are plenty of Nepali to ask directions from. There are also loads of trekkers going in the opposite direction, usually with a guide. 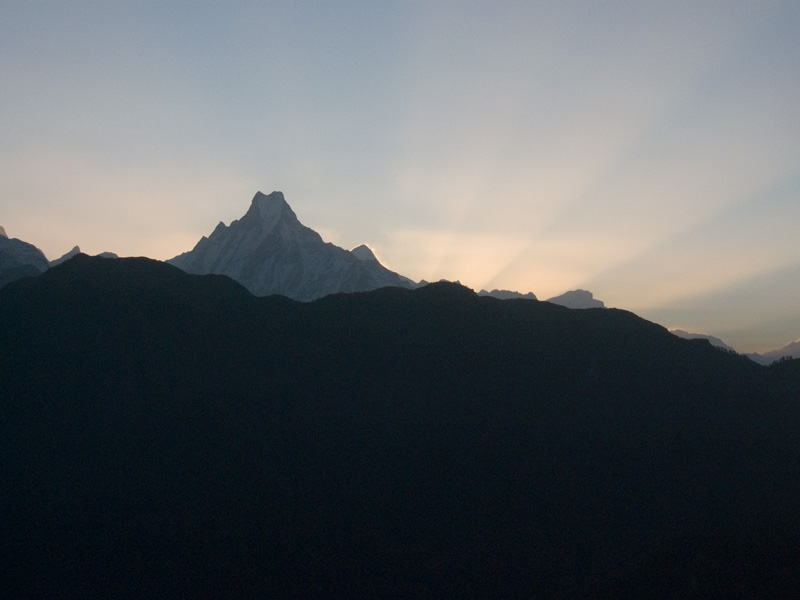 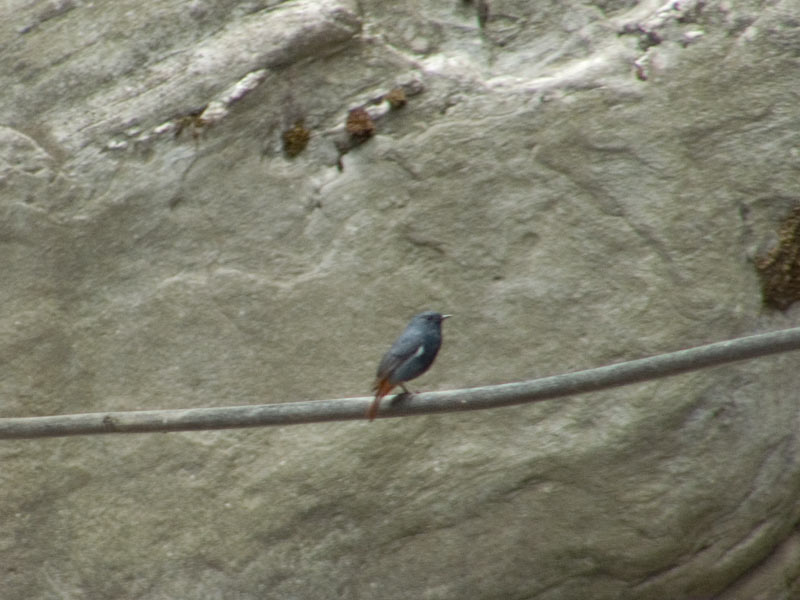 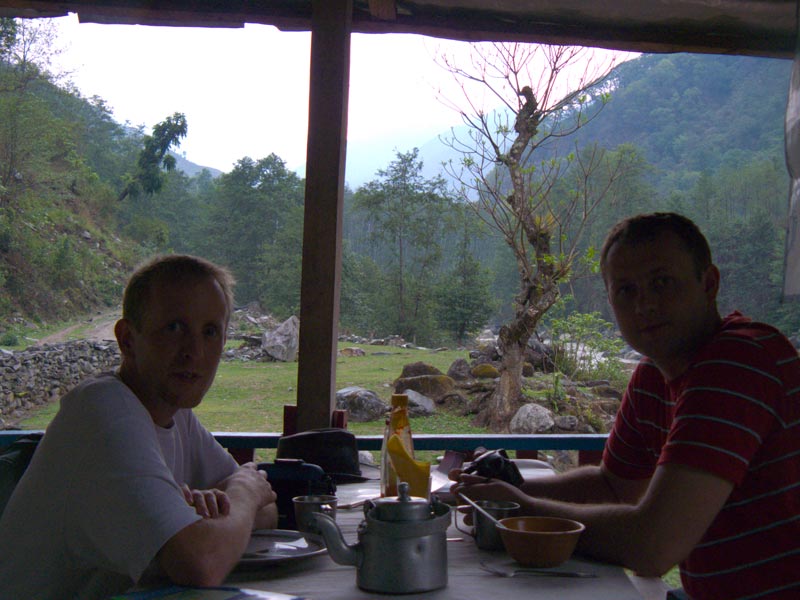 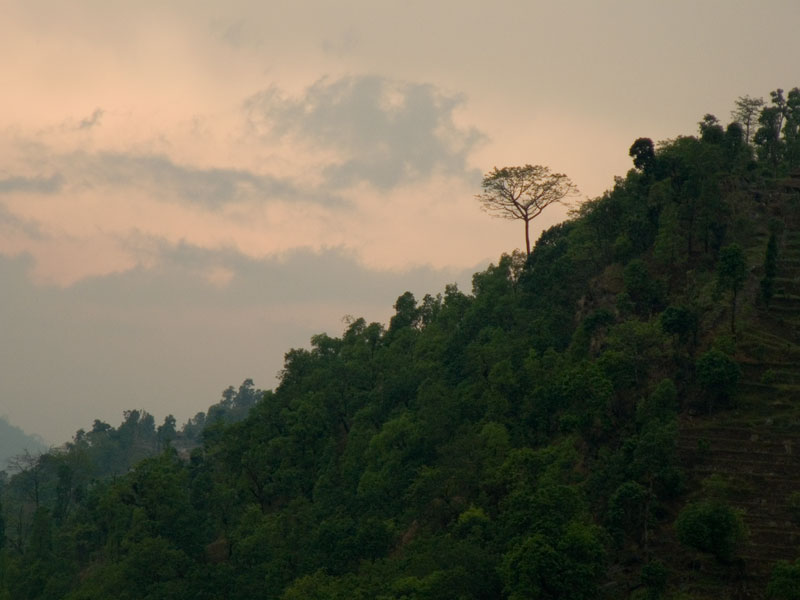 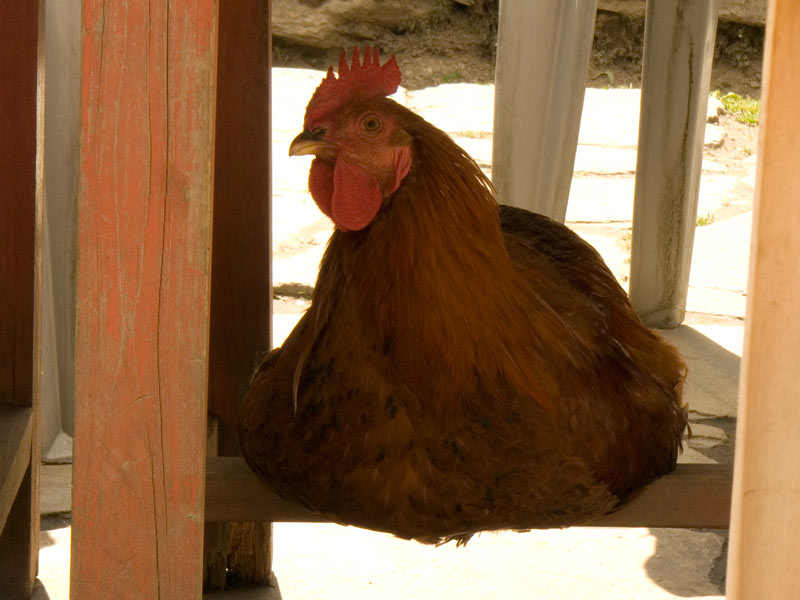 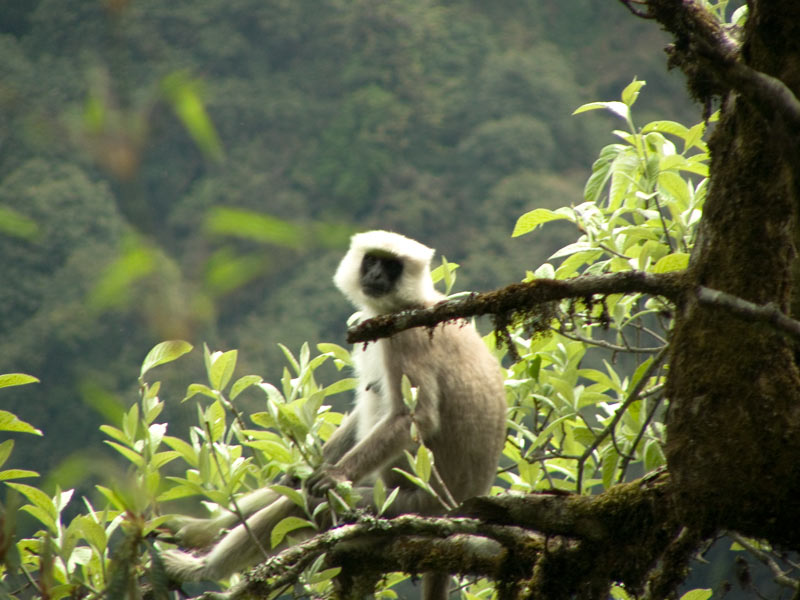 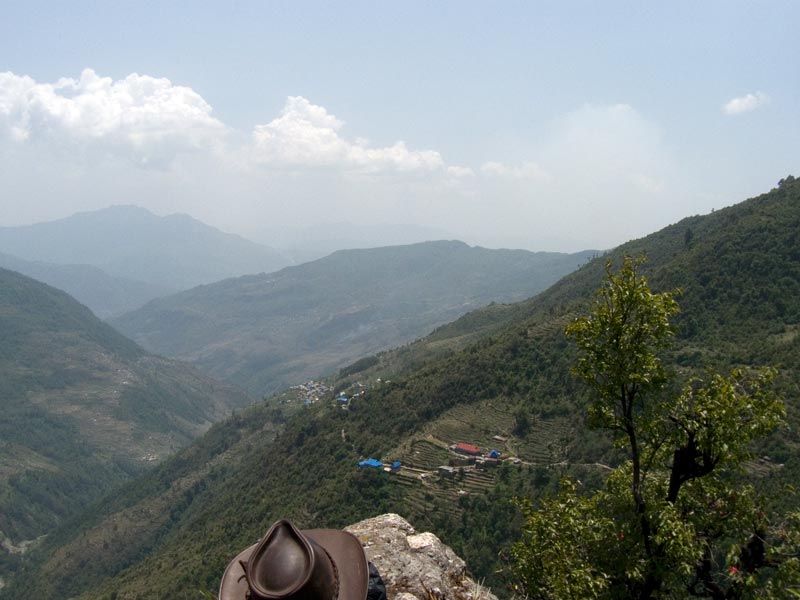 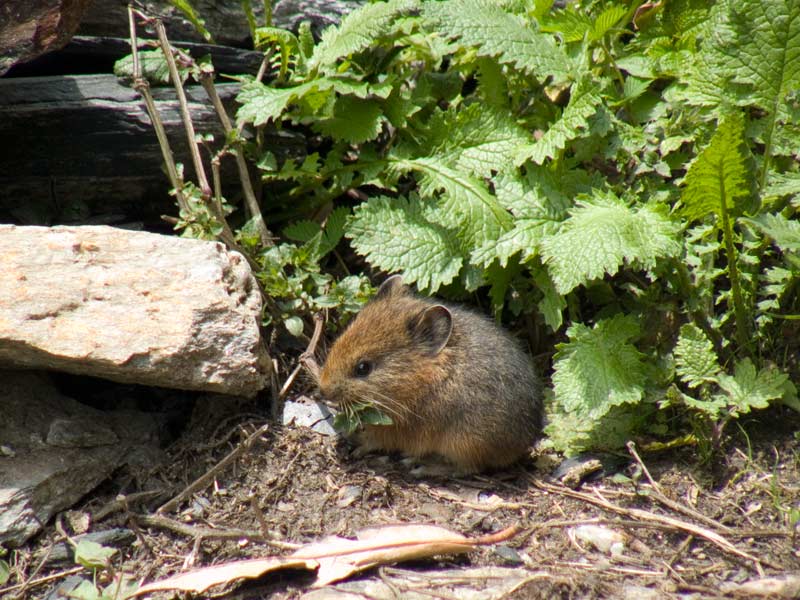 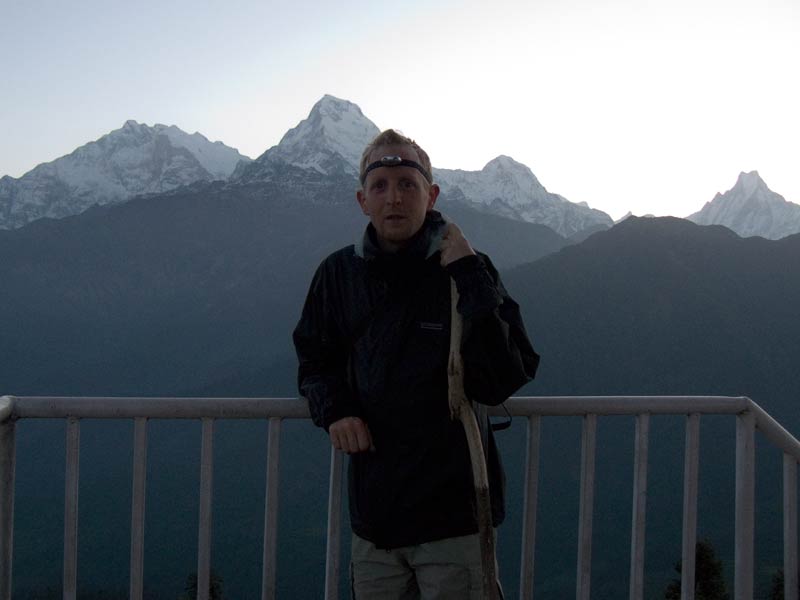 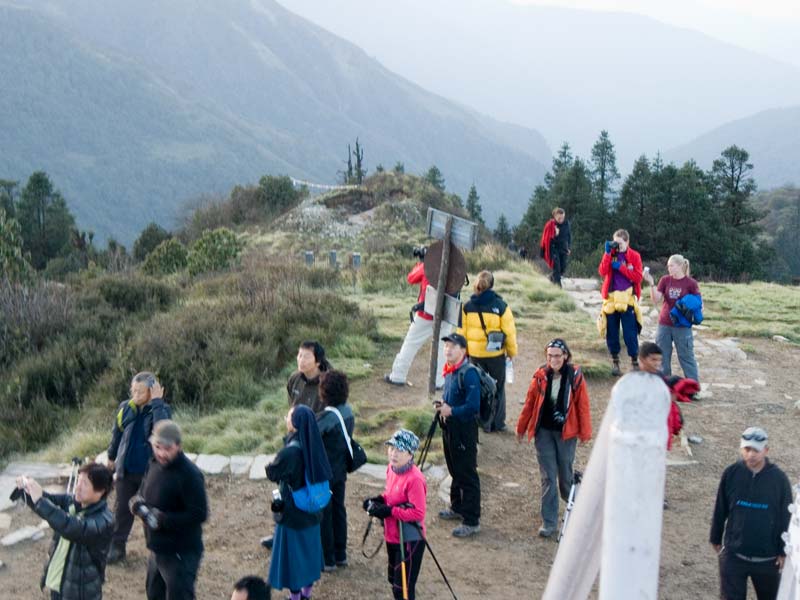 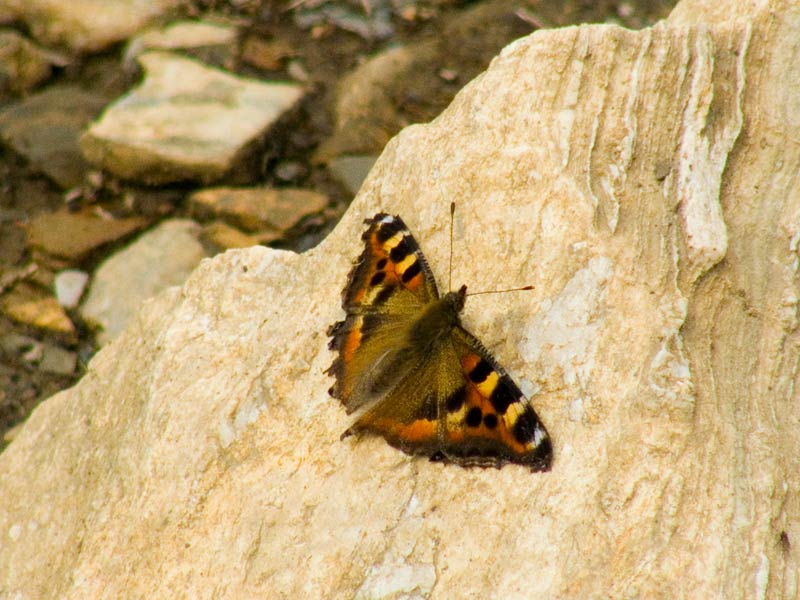 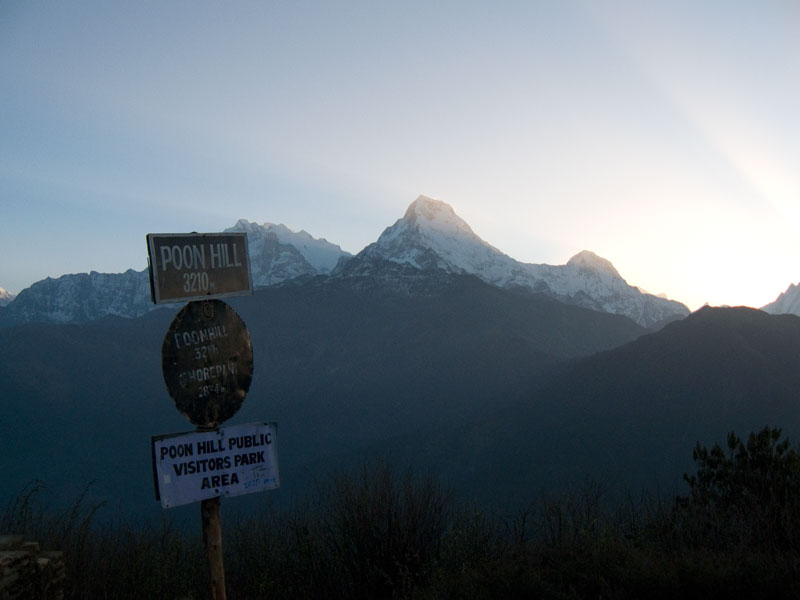 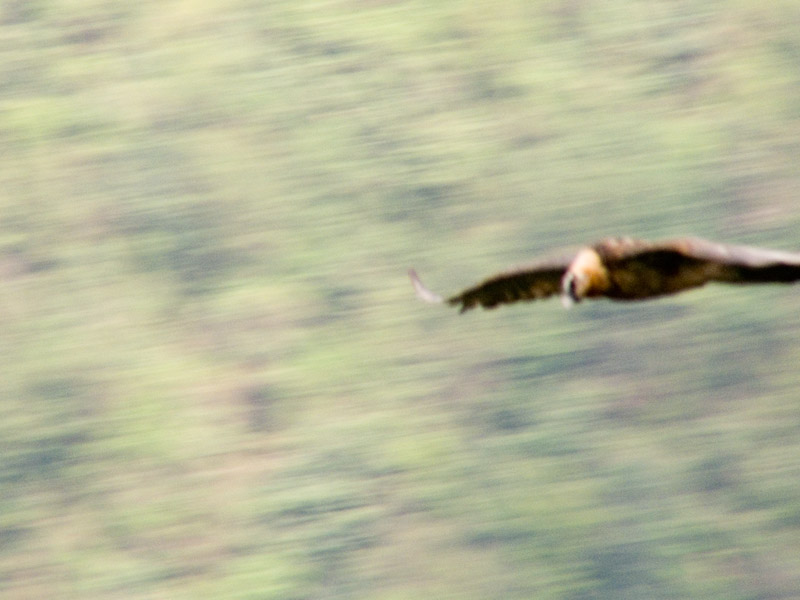 If you look past all the teashops then the scenery is pretty spectacular; there also still plenty of wild animals in the forests, I saw monkeys but there are also deer and leopards if you are lucky enough to spot them.
On day three I made it to Ghorepani from where it is a short hop up to Poon Hill, which at 3210m was the highest point of the trek. Weather permitting, from Poon Hill you can watch the sunrise over the Annapurna Himal and fortunately we had perfect weather for it. Of course normally you would expect to share something like that with a loved one, you could imagine that it could be a very romantic setting. I, of course, shared the experience with about 100 other trekkers, including a group of Chinese all snapping each other in front of the mountains.

From Poon Hill it is possible to get all the way down in one day, and considering you get up at 0430 to watch the sunrise, there is a long day to do it in. Being a contrary individual I decided to go off the beaten track and head for the village of Mauja, according to my map there should be a track that splits off from the main route. I easily found a track that seemed to be in the right place and heading in the correct direction so I followed it. An hour and half later and after much backtracking I came across two deer hunters (at least they claimed to be hunting deer for food). By this time I wasn’t sure that the track was leading me in the right direction any more so I asked the deer hunters how to get to the village. They told me that continuing on the present path would just lead me into the deep forest. So after a short rest I decided to take their advice and headed back to the main path.

The little detour meant that I had to spend another night in the mountains and got back to Pokhara the next morning.

Food of the stay: the Spring rolls there are nothing like the ones you get in England, Nigel had one that was half the size of the plate and looked like a Cornish pasty.

Rosko Recommends: Snowland Guesthouse in Ghorepani is incredibly comfortable and has great food; and sticking to the path.